One of the promised supplements for DragonQuest was a guide to creating your campaign world.  This supplement was started but not completed before SPI went under.

The attached PDF file contains the pages from a draft version of World Generation submitted by Steve Jackson of Steve Jackson Games prior to the demise of SPI.  I received this through a contact at Victory Games in the fall of 1983.  It arrived as a large pile of photocopied, typewritten pages that were at least 3rd  generation copies.  Just barely readable in some cases.  As this was in the days before personal computers and scanners, it mostly just hung around on my gaming shelves waiting for me to do something with it.
As I understand it, Steve's originals were lost years ago in a flood at the SJ Games office his house. While there was at least one other person who had a copy of the version I have, that may have been lost to time as well.
Fast forward to 2005 when powerful PCs and cheap scanners are available.  I've now scanned all  the pages into my computer and done OCR on most.  I approached Steve at that time about releasing the scanned version out for others to enjoy but he wasn't comfortable with the idea so I abided by his wish to not release it. 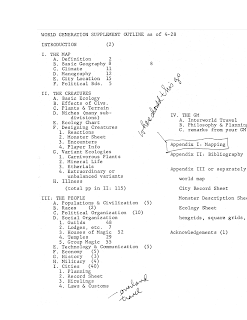 Here we are in 2019 and I now have permission to release what I have to all those DragonQuest (and Steve Jackson) fans who long wondered what happened to it.  Much of the general world building advice within this pages has been written of in other publications but the DragonQuest specific aspects, especially Group Magic, may be of more interest to the devotees of DragonQuest.
I should also mention that the version I received was not complete.  It is missing section III, parts E thru I, section IV in its entirety as well as the appendixes.  Read the cover letter pages at the end for some details about that.  Also note that the Group Magic section is in the PDF twice.  Once as the barely legible scanned pages and again, at the end, in a more usable text form.
I hope that anyone who reads this enjoys the look into this bit of DragonQuest history.